An Ode to the Greasy Spoon

A Toast To Good Breakfasts Everywhere

It was a building barely large enough to be called a closet, with a handful of stools and standing room only.  Tucked into a corner window was the tiny flat top where thick cut bacon and unbroken yolks fought for space with a face-sized flapjack that sizzled away.

For me, this was as close to culinary heaven as I could get.

The greasy spoon is a timeless American tradition of culinary craft that has withstood depressions and recessions and food trends for decades.  They continue to be a place where the working class and their families can bump elbows with white collars and suits while sitting down to a hearty and heaping work of art we call breakfast.  And for me, they make the perfect jumping off point for any adventure.

For those in the southeast and a few other lucky states around the union, no place better embodies the spirit of the greasy spoon like Waffle House.  The yellow and black emblazoned tiny buildings tucked alongside nearly every interstate exit are an institution.  Waitresses shout their orders to a solitary line cook in a language only they speak and moments later the order is served up piping hot.  Hearty food.  Stick to your ribs food.  Drunk food.

Even Anthony Bourdain has a soft spot for the smothered and covered adventure that is the Waffle House.

This nationwide chain isn’t the only game in town.  The American diner is still going strong with mom and pop joints in nearly every city and town serving up made-to-order eggs, pancakes and home fries.

But how did they get here?

The Smithsonian’s article on the history of the diner is the best place to start.

It details how the American diner started as horse drawn “night carts” that opened as other businesses started to close for the night.  These food wagons would catch the early birds going into work or catch the late night theater-goers as they left the shows.  Eventually these evolved to “lunch carts”, then “dinner carts” and thus shortened into “diners”.

Mass manufacturing of the diner eventually took off and solidified what we know today as the classic steel and tile and linoleum of the American diner.

Places like Mel’s in California with their bright colors and old style jukeboxes hearken back to the heyday of the food trend and Waffle House with its counter service and sizzling griddle have turned the classic theme into popular chain restaurants. 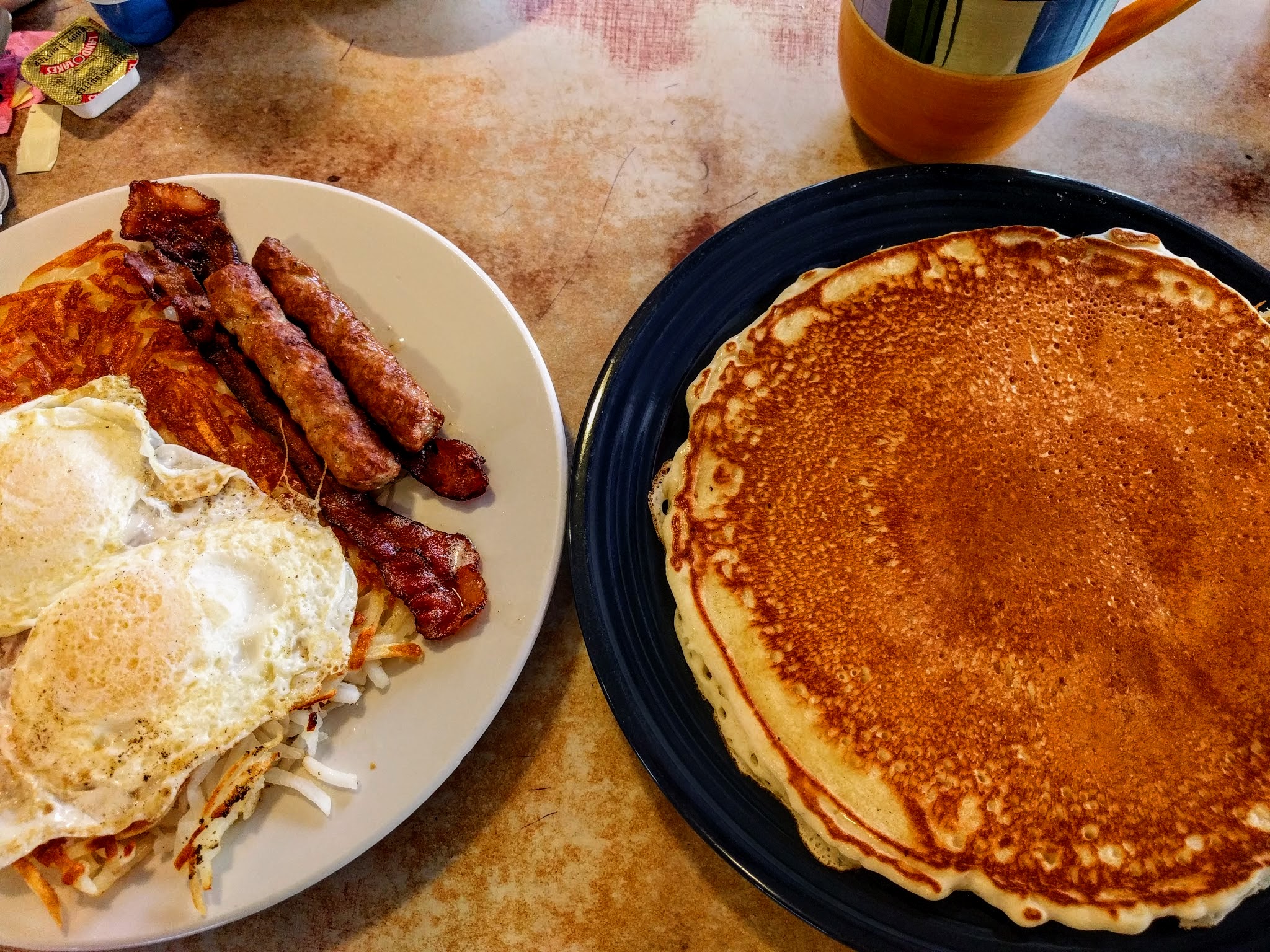 The "Small Breakfast" and the mini pancake. Yeah, you read that right. //PHOTO - Eric Gibson

One place in particular tucked on the corner of a busy street in downtown Sacramento, California undoubtedly fits into the echelon of classic greasy spoon diners without being too self-aware and too assuming.  Although the vintage sign out front screams “burgers”, Jim-Denny’s easily wins the title of the best.

It is a tiny white building with the name in giant bold red letters across the side, the very same “closet with a handful of stools” mentioned earlier.  Inside is one cook and one waitress.  Along the ceiling , elegantly painted onto the woodwork are old menu items with their prices and a plaque that states “Enter as strangers - leave as friends.”  There are no tables and no benches, just a counter and smiling faces.

The two employees both give their names and ask for one in return as the coffee is served up in a mug that looks pulled straight from grandma’s cupboard. Friends already.

The menu is simple but deceptive.  The “small breakfast” is giant.  A large side of hash browns, meat, an egg and a giant plate-sized  “mini-pancake”.  And it only gets bigger from there with items like the “Big Breakfast” which is more of everything and the “Hubcap” which is a giant pancake as wide as thirteen inches. Still hungry?  The “Hubcap with Spokes” is a giant platter of meat, potatoes, eggs and the massive Hubcap pancake on the side.

That breakfast is guaranteed to need its own zip code.  Even Adam Richman of Man vs. Food fame has met this monster.

Massive portions aside, everything at Jim-Denny’s, from the food to the new friends, can be summed up as the seminal greasy spoon experience.  The authentic, classic experience that provides a full belly with no frills.

Sometimes a full belly and a full to go box.

Today, in the age of food trends and hipster menus, the diner still has its place.  Of course the stalwarts like Jim-Denny’s will never die despite a growing surge towards farm to fork with a side of egg whites and alternative meats.

In the heart the Rust Belt in Cleveland, there is a weird yin and yang to the food scene.  In some neighborhoods surrounded by row after row of worn down boarded up buildings a lonely restaurant with a glowing vestige of hope springs forth.  “Corned Beef Here” shouts the neon sign in the window.  Inside can be seen a counter, a cook, some stools and booths and a waitress poised to fill up an empty coffee cup.  It’s the traditional greasy spoon, laced with Italian or Greek heritage.

Several blocks further, however, towards the city center rises up Ohio City, one of Cleveland’s trendier up and coming boroughs, and with it Jack Flaps. 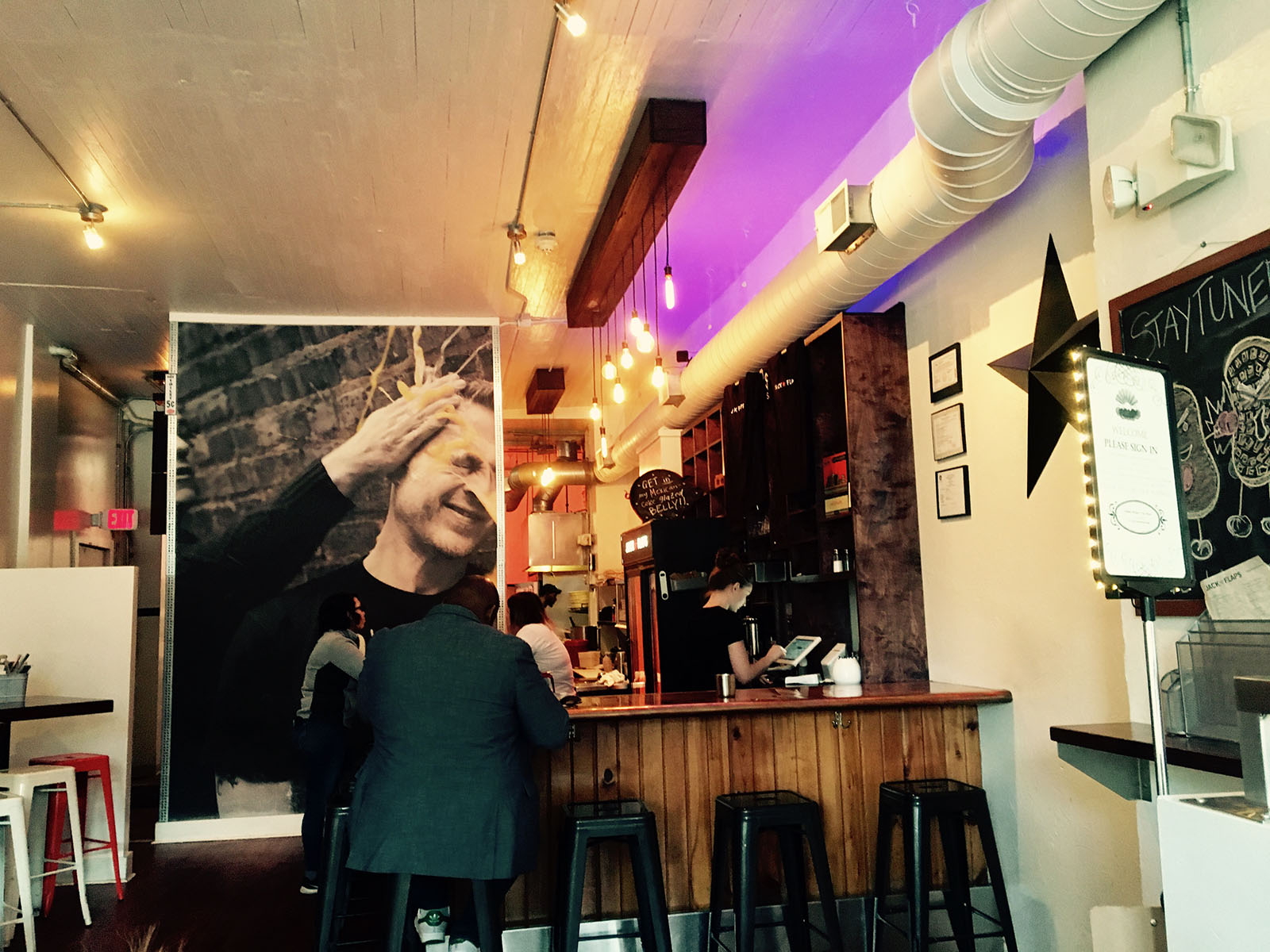 Jack Flaps isn’t big enough to even be considered a hole in the wall.  It is tight, it is cozy, and it has an edge.  Egg-covered black and white art decorates the walls and the staff, with their tattoos and loud music, have the look and feel of a nose-in-the-air hipster bar.

But the bones are there.

In the menu, hidden behind the breakfast bánh mì and the “Real F’n Breakfast Burrito” and its creme fraiche, are the rumblings of a modern greasy spoon.

There be pancakes here.  And they are amazing.

Jack Flaps makes a killer flapjack.  The best in Cleveland by a mile.  With toppings like berry compote, peanut butter and banana, or as one who stringently believes in the purity of maple syrup and a little butter, there is no wrong choice.  A sweet cinnamon butter on the side, and the pancake - more cake than crepe - is made with a batter to write home about.  Top the whole thing with authentic maple syrup and it is easy to see why seating is at a premium during the short time they are open.

There are other places around the country with less of a nod to their roots.

Bacon & Butter in Sacramento is an incredible restaurant complete with a counter and all the accouterments of a down home breakfast spot set in an industrial modern locale, but its menu is so far detached from the greasy spoon or American diner it would never be considered one.

Which for them is a very good thing.  So is their bacon.

But they embody the trend that is taking over.  Fresher, farm-ier, natural-ier.  And it is being done right.

The best I ever tasted

Thankfully the greasy spoon isn’t dying.  There will always be places where a two-egg and meat plate still runs around four bucks, where the coffee is brewed constantly and the pancakes fill up the plate.  Ferreting out the diner the locals call home is one of the most exciting things about traveling or waking up in a new location.

Although while my travels are limited and quite unfinished, these are the eateries that stick with me long after the flavor has left my lips.

For me, the benchmark where all other flapjacks, crepes, and pancakes are measured is Pete’s Coffee Shop.  It is a no frills restaurant slapped on the corner of a downtown parking garage in Knoxville, Tennessee.  They do it all at Pete’s with diner staples for lunch and breakfast however once I tried their pancakes I never looked back.

It might just be my nostalgic taste buds, but the simplicity of Pete’s breakfast hasn’t been topped. The batter was perfect with a hint of vanilla and spice, the cakes, crispy on the outside and fluffy on the inside, were borderline savory.

There have been several close calls yet none have dethroned the king.

The biggest pancakes were served at The Griddle Cafe in Hollywood.  Giants that covered dinner plates over a foot wide and served three high.  Some arrived plain with only a dusting of powdered sugar and others were adorned with sweets and treats like a wedding cake.  And it wasn’t just the pancakes that made diners pause, the portions were utterly huge in every way.

In Salem, Massachusetts on the corner of a very busy square in view of the Bewitched statue is Fountain Place.  Inside the cozy breakfast nook featured much of the same offerings that could be found anywhere else except on their menu hidden among the simple breakfasts was a unique northern take on the traditional two egg breakfast - the choice of kielbasa as my side.  That might breakfast is what is pictured at the top of this page.

Of course I had to taste it, and it was delicious.

On the topic of meats that accompany eggs and potatoes in a normal breakfast situation, corned beef hash is another morning meal staple by which I measure up any and all greasy spoons that list it on the menu.

It is easy to make and hard to mess up.

Slap some atop crispy potatoes or hashbrowns and an over-medium egg with rye toast and the day is set.  Some places give the appearance of being able to fire up a mean plate o’ the hash yet have proven to be disappointing.  Luckily this is rarely the case.

For me, the best corned beef hash was at Grumpy’s Cafe in Tremont, a small ‘burb close to downtown Cleveland, Ohio.  In this eclectic little neighborhood with ancient bars and the house from “A Christmas Story”, a hipster vibe is spreading.  Grumpy’s is special in a lot of ways.  Local artists sell their work on the walls and the young staff take pride in the freshness of their ingredients.  In essence it is the perfect combination of hipster and grease.

Back to the hash.

The eggs were cooked perfectly to order and the potatoes were crispy and spicy.  All standard fare.  But the corned beef, sitting there with hand pulled chunks of meat mixed with root veggies and seasoning was the most beautiful example of what the dish should be. It wasn’t mercilessly chopped into mush and stuffed into a can.  It was the definition of corned beef hash and anything else should be embarrassed to carry the name.

While the travels may vary and the ingredients may differ from coast to coast, the American staple we call the greasy spoon endures. It endures even the toughest times by filling the bellies of the beleaguered and the unworn together in a happy and cozy place.

Thankfully there is no shortage of greasy spoons to send us off into doomsday unprepared. 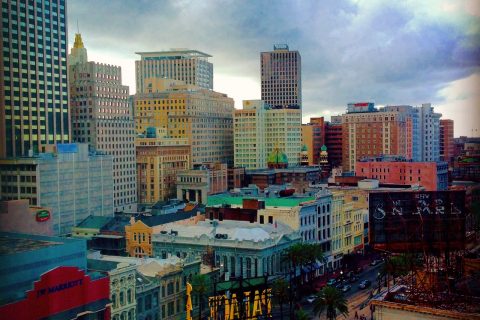 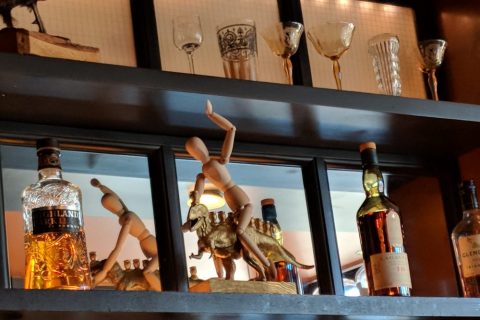 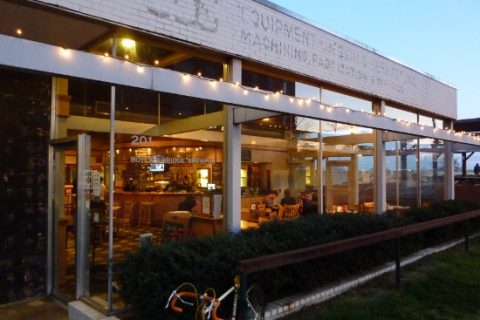 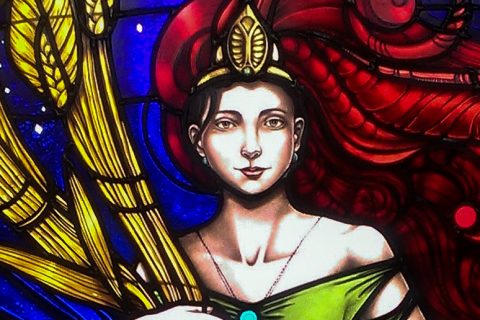 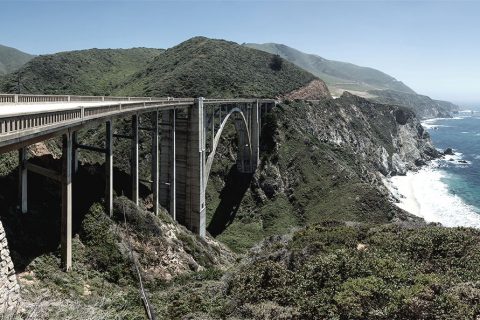 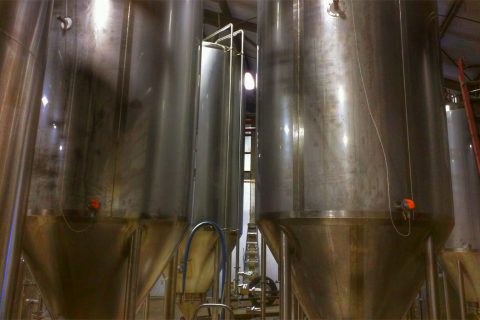 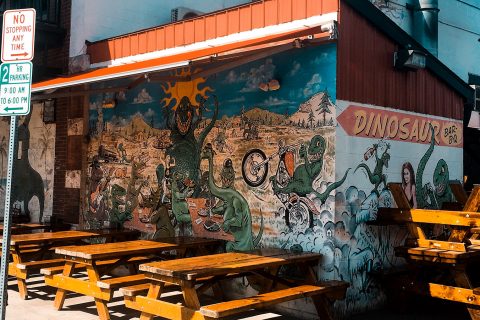